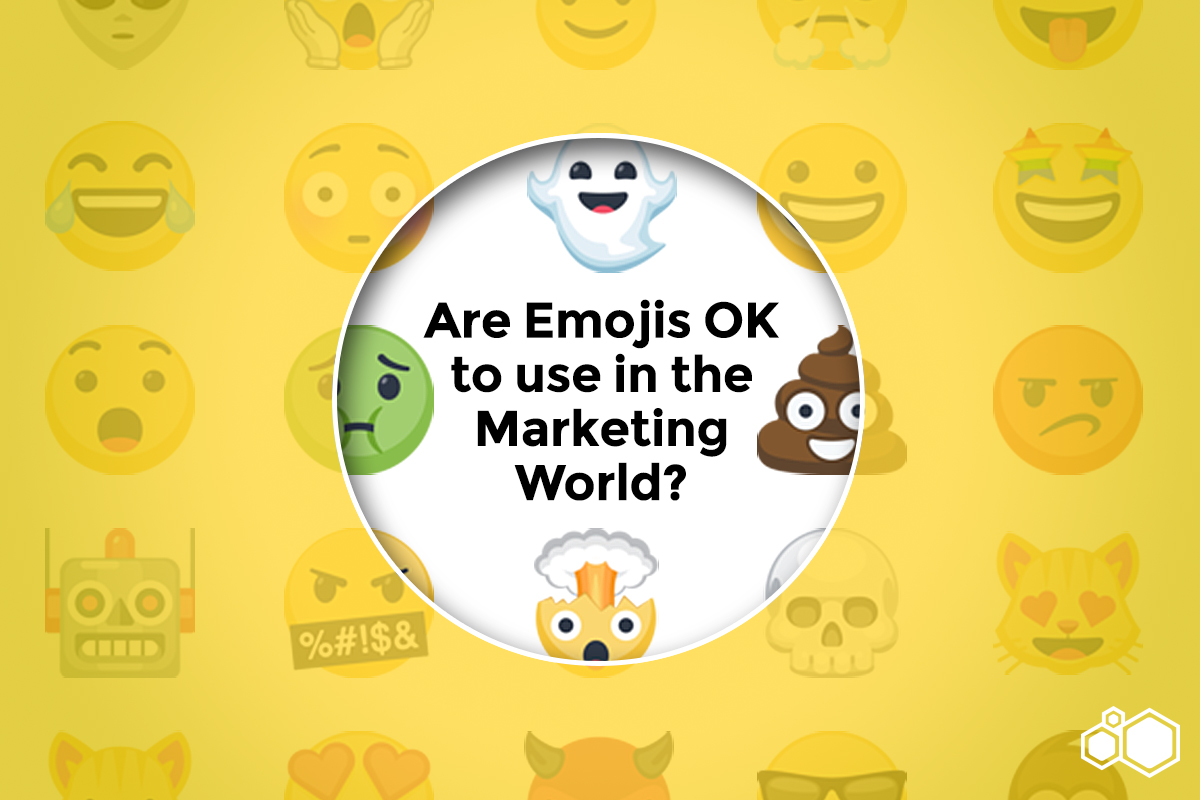 Are Emojis Ok to Use in the Marketing World?

There’s currently a heated discussion going on throughout the marketing world and it’s centered around the emoji. Should brands use them? If brands do use them, when is it acceptable and how often can you use them?

There’s two sides to the debate. Some are adamant about their use, saying it humanizes brands and brings a light-hearted, welcoming tone. The flip side, they’re unprofessional, crude, and can bring mixed meanings to your message.

Emojis are an integral part of digital communication, especially among millennials. I opened my phone and within looking through two text messages I came across an emoji. Recent studies show that 92 percent of the online population uses emojis on a regular basis whether it’s through text message or another form of messaging.

There’s a fine line when it comes to using emojis in your campaign. Below, we’re going to look at when and how you should use them and what to avoid so you don’t cause your brand any embarrassment in the future.

What is an Emoji?

So, what is an emoji? The basic definition of an emoji is a small digital image or icon used to express an idea, emotion, commonly known object, etc., in electronic communication. Modern emojis became popular around 2011 – it was around this time that Apple adopted a full-on emoji keyboard to its iOS with Android following suit shortly after. This popularity is due to the fact that humans are decidedly visual creatures. Ninety percent of all learning and understanding is done visually. Seeing an image to convey an emotion or message falls in line with our way of interpretation.

But, modern emojis aren’t the first of their kind, the real history of emojis dates back to 3,200 B.C. when humans started using hieroglyphics as a form of expression and storytelling. Fast forward 5,000 years and emojis have become a sort-of primitive form of modern hieroglyphics.

Emojis spawned from emoticons – text-based emotions like ; – ) or : – (. Emoticons first came about due to the fact that typists were seeing that jokes were being misinterpreted or that sometimes negative connotations would come from a message even though that wasn’t the intention. Therefore, they came up with a system that was quickly adopted to try and convey what emotions were being told through the text which then led to the eventual progression of emojis.

When Should I Use an Emoji for B2B?

There are varying trains of thought when it comes to using emojis for B2B communication. Generally speaking, it’s best to avoid using emojis for employee to employee internal workplace communications. This is usually because meanings are vague and can be construed into something that was entirely unintentional – think blame, sexual harassment, racism, etc. Unless you enjoy putting your HR department through the ringer, it’s best to avoid using them for internal communications all together.

It’s also a best practice to not use them like consumers do – as in, don’t use a string of emojis or even ones that would be considered risky. This is an excellent way to embarrass your brand and quickly make it the butt of many jokes. An example, you could be trying to convey a cat nip campaign that shows a cat being sly and sneaking in a bit extra of the good stuff, but if there’s a connection that a sly cat emoji (yes, a sly cat emoji exists) has a meaning of a one-night stand, then it’s best not to associate that brand to promiscuity. Remember, the internet never forgets.

When you do use an emoji, you need to remember that they are age specific. Unless they were sheltered under a rock, millennials get them – particularly Gen Z. Keep your emoji use basic – smileys, thumbs-up, claps, even the “100” symbol. Outside of that, you start to venture into dangerous territory and could create unintended consequences to your meaning.

As the saying goes, when in doubt, leave it out.

Reserve the use of emojis for long-time clients if you’re going to use them in email communication. Don’t use them on new leads. This is a quick way to confuse your lead regardless of age. Even if it’s a simple smiley at the end of a bid, that could still cause confusion and not inspire confidence.

Use it in an email header to grab attention. A study was done by Rene Kulka on his newsletter recipients and it was found that there was a notable increase in email open rates. This was due to the fact that the email header stood out and drew more attention to it compared to other emails. Fifty-three percent of all emails are opened and read on a mobile device. When users are scrolling through their email and seeing endless streams of emails, an emoji in the header will stand out. Now this doesn’t mean use them all the time. You need to be sparing with it.

If you’re blasting out a newsletter to your subscribers, don’t use it in the body of your content. It’s not that you can’t, you just shouldn’t. Though it may seem more personable and light-hearted, it’s unprofessional.

The benefits of using emojis can prove plentiful. When consumers see an emoji being used (properly) they can quickly relate to it and the brand tied to it. It can increase user engagement which then drives more traffic. As Neal Patel describes below, using emojis in your campaign is a great way to garner attention.

They also help to clarify the tone of a message. If you’re wanting to have a light, fun post or newsletter and you’re wanting to show some excitement, using periods doesn’t convey that message clearly. Proper use of emojis can add further context to the message giving a clear idea of the emotion you are trying to convey.

Another benefit is that emojis give off a friendly, personal feel. Most mobile users use some form of emojis in their day-to-day conversations so seeing one associated positively with a brand creates an identifying factor. It reduces the chance for ‘negativity effect’ – things of a more negative nature (e.g. unpleasant thoughts, emotions, or social interactions; harmful/traumatic events) have a greater effect on one’s psychological state and processes than neutral or positive things. Hospitals or dental offices can use emojis to help cater to a friendly experience rather than the fear or negative bias some consumers have formulated.

Regardless of your budget or how you string your emojis together, following these guidelines will help you better implement your message and cater to the audience you’re looking for. Still have questions? Schedule a free meeting with us!

PrevPreviousWhat Do Avocados & Online Video have in Common?
NextMeasuring the Influence – What to Look for in Your InfluencersNext