Branding Fought the Law (And the Law Won)

While also being really funny, this Facebook post served as a reminder that Oconee County was suffering from an unusually heavy ice storm. The post received 1,199 Likes, 170 comments, and 1,693 Shares. The story also ran on the LA Times, Fox News and various local publications.

If you’re a social media manager, you dream about this sort of engagement. But some of you are probably chalking this up to a random event or luck. That’s where you would be completely wrong. Just a quick look at the Oconee County Facebook page tells you that these fine officers could teach people a thing or two about social media. Below are some of the best things on the Sheriff’s Office Facebook page. Be prepared to laugh! 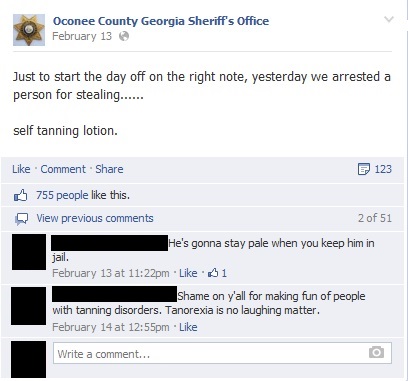 Whimsy: The personnel at Oconee County are funny and that goes a long way. But more than that, this Georgia Sheriff’s Office is approaching their content in a very fun, engaging way. Trust me, I looked at other public and governmental Facebook pages, and most of them were drier than the last piece of leftover Valentine’s Day chocolate. Instead of presenting their content with a “just the facts, ma’am” approach, the officers at Oconee County are adding a bit of whimsy to their content and that’s helping with their brand. 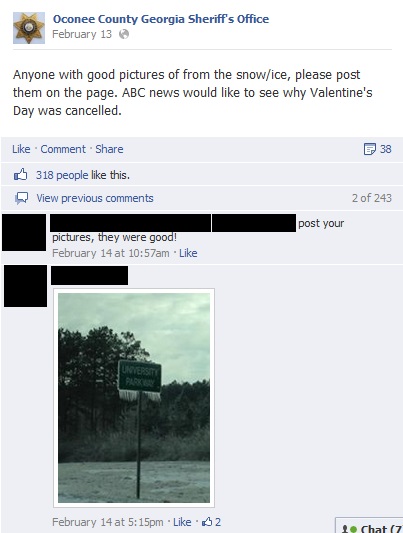 Engagement: Who hasn’t used the old “post your winter pictures here” status on Facebook? The difference between success and failure is how Oconee County presents their call to action. They already have a built-in following due to their humor and they included the ever-so-tempting second sentence: “ACE News would like to see…” What Facebook Fan could resist possibly getting their own content put on national TV? This is a brilliant way to get more engagement.

Content: Not everything Oconee County posts is funny (although quite a bit of it is). This is the online mouthpiece for a Sheriff’s Office, after all. They post about murders and disappearances when they happen. There are also earthquakes and fires. But this little government department manages to show some personality in every post. There are also statuses about officers lost in the line of duty and you can feel the humanity there as well. I’m sure most officers feel this way, but Oconee County shares that insight with their fans, and they are rewarded with engagement and positive feedback for it.

It’s hard to find a post on this page that has less than 10 Likes or Shares. That’s pretty impressive for a local brand, no matter who you are. As of today, Oconee County Sheriff’s Office has 11,201 Facebook Fans in a county with a population of 33,619.

Is your local government’s social media amazing or terrible? Have you found incredible engagement in an unlikely place? I’d love to hear about it. Comment below or tell me about it on Twitter.

PrevPreviousMarketing Automation: A Tool Your Company Can’t Afford to Ignore
NextSochi 2014 Wasn’t All About the MedalsNext