Not Even Ron Artest Could Wreck The Pacers’ Social Mojo

As a kid growing up in the Hoosier state, I’ve always been a huge fan of the Pacers. Watching Reggie Miller, the Davis “brothers” and the Dunkin’ Dutchman battle the Eastern Conference elite was a staple of my childhood and something my family enjoyed together.

I was a rowdy fan when we lost to the Lakers in the 2001 Finals and throughout the Jermaine O’Neal years (I still have a pretty clean pair of #7’s Nikes circa 2002) until my fandom was jeopardized by a tiny scuffle at the Palace at Auburn Hills. I wasn’t the only fan who expressed disappointment with the team through boycott. The Pacers were in the NBA attendance basement for several years after the event, including a dead last ranking in 2008.

Fortunately, today’s Pacers are positive role models, talented and light years away from the franchise’s darkest days. As a result, fans are back in full force. Just check out this side-by-side picture showing you the difference between then and now: 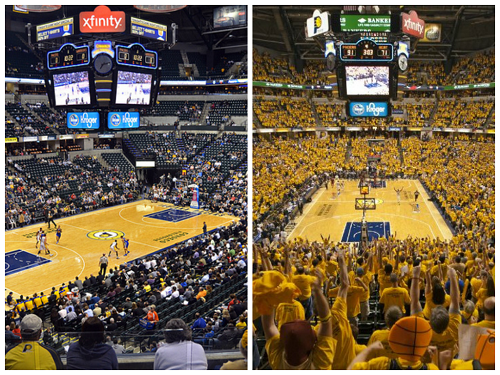 But it hasn’t been solely the talented roster, our young head coach or a legendary President of Basketball Operations that have stepped their games up. It’s been an organization-wide effort including the Digital Marketing team. Consider how the team’s approach to social media and fan engagement has helped contribute to the revitalization of the Pacers’ fan base.

The Pacers’ Digital Marketing team utilizes Facebook, Twitter, Tumblr, Pinterest, Instagram and YouTube to connect with fans and share content. Using such a robust and well-rounded mix of social platforms allows fans to connect with the team in their own preferred way. They’re also sticklers about getting the right content on the right platform at the right time. For example, on Instagram fans see images depicting intimate almost “behind-the-scenes” moments allowing fans to feel privy to something special. On Tumblr, the team tells a story through classic photography and connects fans with the team’s rich history. 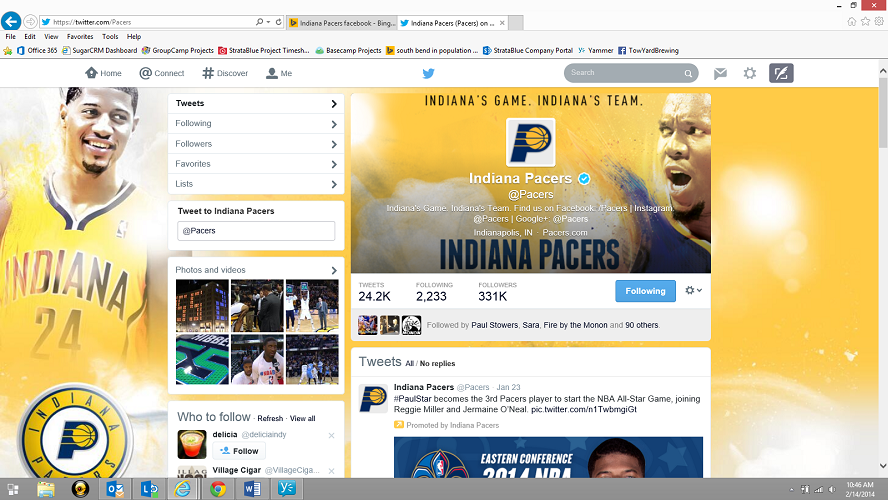 What other content does the team consider “high quality?” According to Celeste Ballou, the Pacers Digital Marketing Manager, the team focuses on “getting great photos, quotes, linking to relevant, interesting content on our websites, ticket offers, and creating well-designed graphics that excite fans enough for them to share and like.”

The team’s dedication to fan engagement has been noticed and appreciated by many. This approach helped them surpass 1,000,000 Facebook fans earlier this year and recently landed them an NBA award for Social Media Engagement. So how exactly do they foster social engagement? Here are a few specific types of content they offer: About the players info, game schedules, mid-game posts and score updates, questions to fans, and game results. According to PRWeb, another key component of their engagement is tied to how often they reply to fans’ messages. The Pacers excel in this area, trailing only the Brooklyn Nets in this category last season. 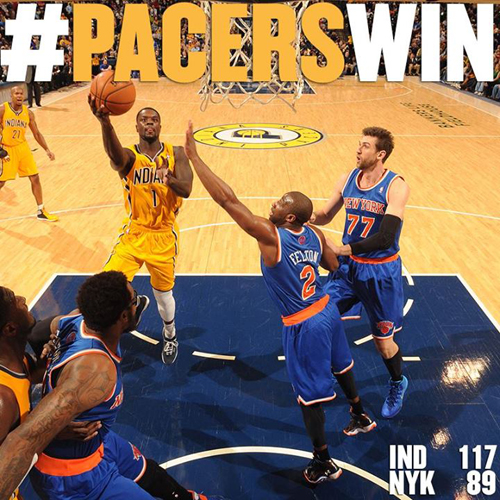 When you look closely at the Pacers’ non-basketball operations, you realize that their players and coaches are backed by an equally skilled group of supporting professionals. Everyone is on the same page and working toward a single goal. Do you think Ballou’s team has any “NBA Champions” graphics in the works yet? Connect with me on Twitter @AHersh317 to talk social media, Pacers or the boxer formerly known as Ron Artest.