Video. That’s it. No magic formula. By simply putting in video and leaving everything the same – copy, targeting, and budget – we were able to drop one of our clients’ CPL cost per lead by 81.45% and increase the number of leads by a staggering 509%.

This shouldn’t come as a surprise. For months, Facebook has been pumping the power of video with metric after metric. And yes, Facebook’s video push hasn’t been without problems, but what’s more important – an impression or lead? So, the TL;DR version of this blog is that, it is my opinion (which I will fight you over), video will win on any Facebook ad 10 times out of 10. If you aren’t going video first in 2017, you’re wasting time and money.

Okay, you want details. Fine. Allow me to paint the picture. The time was August. The year, 2016, the Client ***** (damn NDA’s). The service, carpet cleaning. Got all that? Ready? Let’s jump into the numbers.

Brutal, right? Sure, any number of things could have been changed with this ad. Maybe it was the creative? 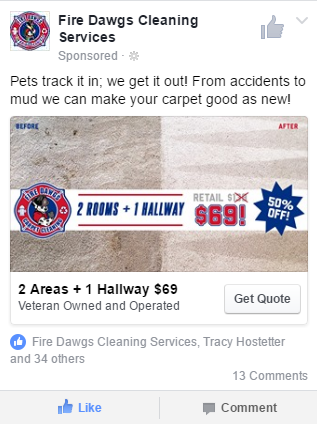 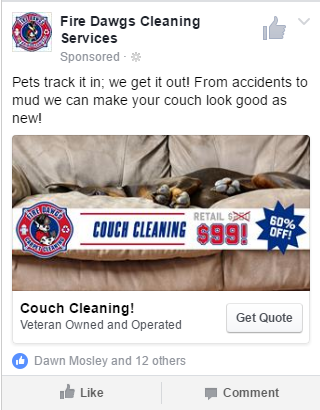 Our market research showed us that, for this client’s ideal customer, before and afters and things relating to pets would be the most relevant. Combine that with a killer deal, and you should have a winner on your hands, right? Well, yes and no. On Facebook, as well as any other platform, when you place ads, you’re bidding for a spot to get someone’s attention. If you have the right bid, you get that spot, but that doesn’t mean it will be a good impression or it will convert. You can have the best deal in the world as part of your ad, but if you can’t get that consumers attention, it won’t matter. Video does that. It grabs people; it’s simply more (and this is my favorite term in the mobile world) thumb stopping. For the longest time, we were pushing this client to either let us shoot or provide us with video. Well, on September, it finally happened.

Now, let’s go ahead and kill another objection to video. “But it costs too much” and “I don’t have video equipment.”

In your right pocket (just a guess), you have an incredibly powerful high megapixel camera. The above video was filmed on a cellphone in the painful portrait (vertical) style. It took the client all of 2 minutes to shoot and a few minutes to upload and send to us. Zero editing was done in this video. This small, inexpensive change made a night and day difference. It brought in a 71.43% increase in the number of leads and a 33.68% decrease in the cost per lead. This is with increasing the cost of the deal by $30! Success, right? But wait, there’s more.

What did we do? Well, I tightened the targeting and added a look-alike audience of all past leads. We also segmented the ad to the only server in our top performing zip codes and only during historically higher converting dayparts. We also added another service to the rotation. This allows us to spend the client’s money where and when the client was making money. We also tightened the age groups to the segment that brought in the most leads. These changes allowed us to drop the cost per lead another 72.04% to $11.65/lead and increase the number of leads again by a ball busting 255.56%.

When we compare October’s numbers to August’s, we sit at a stunning 509.52% increase in leads and an 82.3% decrease in cost.

Today, we average a cost per lead of around $10–$13 depending on the offer and the service. So, what do you think? Again, you don’t need to go balls to the wall and buy a $2,000 camera and full video production staff. There are tons of apps and tools out there that can help you create a production quality video with just your cell phone. However, if you do want to pony up and play with the big boys, Stratablue’s video production services is an extremely cost effective tool. Not only can we make the video for you, but we can also get it out there and have it bring in that coveted ROI.

So, it begs the question. Why? Well, I don’t think it does because the numbers speak for themselves, but let’s pretend it does. Video, as I said, is more thumb stopping. Think about your daily activity on Facebook and the internet. When scrolling through a newsfeed, you’ve likely stopped on a fast-moving video by the BuzzFeed offshoot Tasty (or some variation thereof), right? Why? Because of what a visual creates. Our eyes are drawn to movement. In a static site, the first thing you’ll see is something moving. Now, if you combine movement with subtitles, you’ll have effectively gotten someone’s attention. Now you have 3 seconds to do something with it.

What would a 255% increase in qualified leads do for your clients?

Got another opinion? Think you could make a static image outperform my videos? Well…cash me outside howbow dah?

PrevPreviousChatbots: An Evolution
NextLeveraging Instagram to Boost Your B2B BrandNext