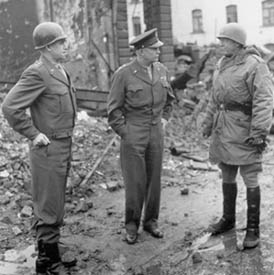 If you’re trying to move a team toward a new vision, being an effective leader will require that you champion that vision. Stick to the role of evangelist and don’t become preoccupied with implementation. Vision implementation needs to wait until you’ve achieved org-wide buy-in. And while evangelizing, remember that it’s not enough to make an announcement at a company meeting and assume that buy-in will happen automatically. Trust me, it won’t. You need to campaign for the vision over time and—most importantly—consistently articulate how achieving this vision will impact individuals. Evangelize the vision while humanizing the outcome.

Think of this leadership style as the General Patton approach. It relies on heavy use of chain-of-command and orders. It’s a command style of leadership and while it may have been perfectly suited for Patton’s Third Army in the European Theater during WWII, it doesn’t work well at all for common usage in the modern office. This style should be used extremely sparingly, and if used, should be done very intentionally to produce an intended outcome. When used by someone who normally tends either toward The Evangelist or Collaborator/Facilitator styles it will produce a certain cognitive dissonance and create significant impact because it likely will seem very out of character.

This style of leadership tends toward non-hierarchical and is what many of us may gravitate toward more naturally. The reason this approach is effective in so many situations is because rather than a communication kind of monologue, this style of leadership invites dialogue. Rather than giving closed end direction, this approach invites feedback. Someone exercising this leadership style will frequently ask questions like, “How can I support you in X?”, “What do you need from me to be successful in accomplishing X?”, “What resource or human capital allocation will ensure your success?” This approach accomplishes three things: it allows you to help actively problem-solve and proactively think through potential difficulties in a project’s execution, it demonstrates that you care about an individual’s success and also gives the individual a psychological boost of knowing they’re not in it alone.

The Importance of Messaging

Regardless of what leadership style you use and find works best for you, never underestimate the importance of proper messaging. Very often, leadership teams will become so used to talking about a specific topic that they can easily lose track of the fact that they haven’t discussed it with anyone outside of the leadership team yet. This can result in a lack of discipline with respect to rolling out information in an organized, coherent, logical, well-timed and properly nuanced fashion. Proper messaging from leadership matters immensely. Done the right way, it can create excitement at the team level and an accompanying morale boost. But done poorly, the opposite can happen in addition to appearing ill-organized and less than adept. Messaging should be crafted with an eye toward how individuals will react to it. Very often, leaders craft messaging based around logic—forgetting in the process that humans aren’t all inherently logical creatures. We’re also emotional beings, and proper message crafting can wrap the logical package in an appealing cloak of emotive language.