No matter if you want to build a wall or tear it down, there will always be a language barrier for some here in America. Facebook wants to help you cost effectively break down that barrier by offering tons of language features.

Currently Facebook is available in 70+ different languages, and ‘Ol Marky Mark has no plans to stop until the entire world is connected. With the election season in full swing, race relations have come up numerous times. Just like in politics,  in marketing, you can’t look at the world through rose-tinted lenses. Unlike traditional media, digital allows you to effectively and cheaply personalize messages to niche markets.

Now, before we get too far into a race debate on what counts as Hispanic and what doesn’t, let’s get this out there. Facebook states that:

“The US Hispanic cluster is not designed to identify people who are ethnically Hispanic. It is based on actual users who are interested in or will respond well to Hispanic content, based on how they use Facebook and what they share on Facebook.” 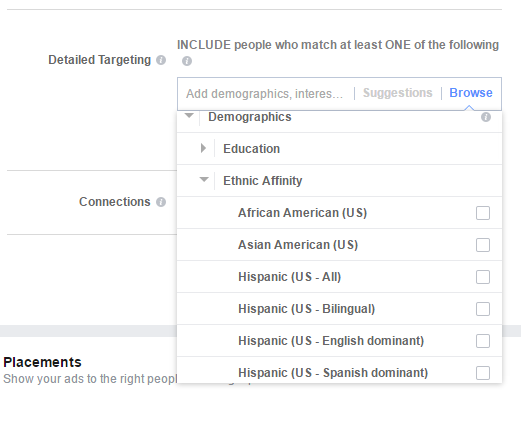 In layman’s terms, that means that your ad could be served to people who are ethnically white or black but are prone to engaging in some positive way to Hispanic-related content. So for example, while I am ethnically white, I could be grouped into an audience using the Hispanic affinity because I have an unhealthy obsession with authentic tacos, and have been on my fair share of South American spring breaks. But that would only be if you’re targeting a Hispanic audience in the US with an English dominance. The fact of the matter is, not everyone has English set as their primary language. That’s why in ads manager under the gender setting there is a Language section. 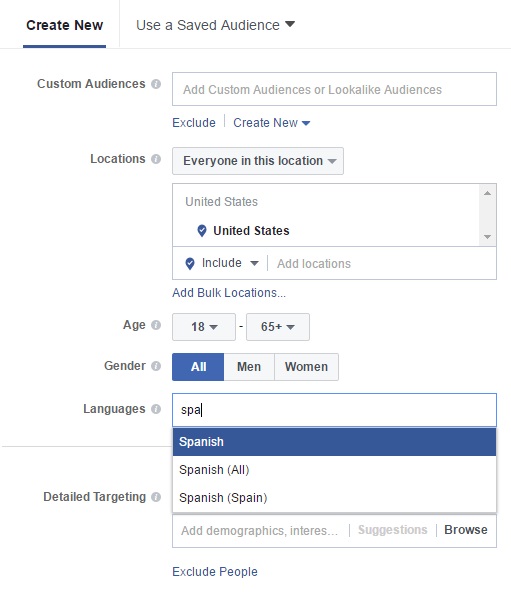 Adding Spanish to your targeting here will make it so your ads will only be served to those who have Spanish set as their language of choice.

If you do this, however, you need to rebuild your campaign from the ground up. You need to rework everything from copy to targeting. You’ll want to make sure you convert everything in the ad and form to Spanish – from post copy to graphic text. Don’t worry about the CTA though. When I asked Facebook about that, they assured me it that it would appear in whatever language the user has their Facebook language set to.  If using Facebook’s Lead Gen tool, make sure you change the language of the form to your target language as well.

This is done in the 2nd step of the lead gen set up where you give your form a name. 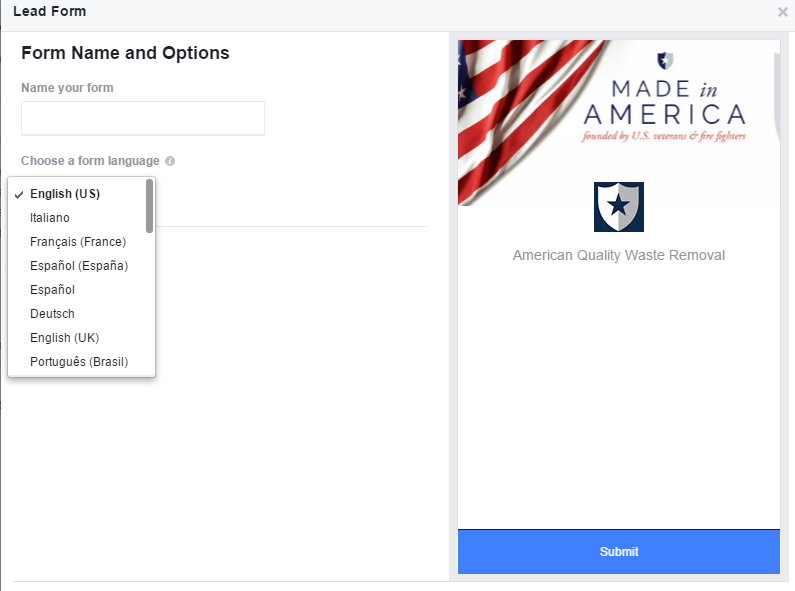 Now the fun begins – audience segmentation and split testing!  Facebook breaks their Ethnic Affinity audiences into three segments: Spanish-dominant, Bilingual, and English-dominant. You can use your imagination on which would best be used for what, but we wanted to run a test to see if some of the information Facebook presented was true. The table below shows how those preferences are broken down.

Our test was done with one of our restaurant franchise clients that have multiple locations throughout Indiana. I wanted to see what the results would be by targeting people who have their Facebook language set to Spanish. We then wanted to break that down a layer deeper and test out the Ethnic Affinity targeting. We did this by breaking the ad into two Spanish ad sets and an English ad set as a control.

This was a limited test run with a$100 budget. Our  goal was to get people to give us their email addresses by signing up for the client’s newsletter. We would then use those emails to look for a walk-through rate tracked by a Wi-fi-gate called Zenreach and act as a drip automation tool. (We will post more about the walk-through results after enough time has be given.) Below are the ad sets that we used. 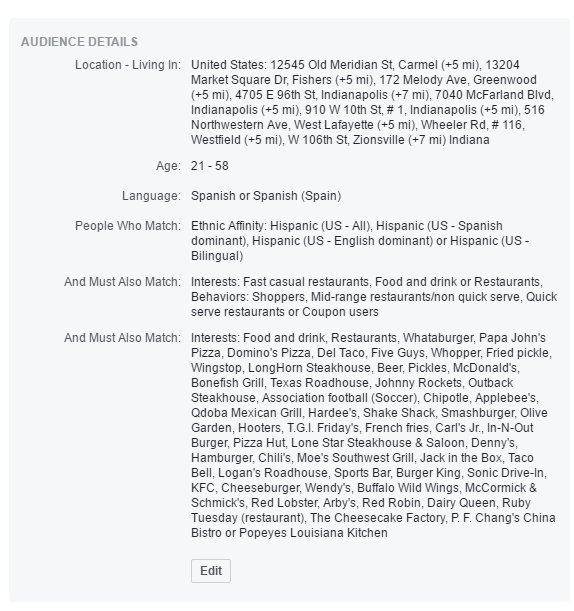 So we ran the ads for about a week, and they produced the following results.

So was it as success? I would say yes. Our goal was to collect email address from those in the target audience. For a cost of $100, we were able to generate 25 email address. Now it should be said that for this campaign, affinity had an audience of 29,000 and  No affinity had an audience of 41,000. These ads spread around a few mile radius of their nine stores and in areas that are more prone to being densely populated by Hispanics. Research shows that Hispanics are highly engaged with social media, and there are only a handful companies right now are tapping into this market with a buying power of a projected between $1.2 and $1.5 Trillion dollars.

Our test holds true to this conjecture. Neglecting the actual ad spends, we see a higher Click-Through-Rate with our Spanish audience. Because this was a niche audience, the CPA was higher than the English control group (which also had more budget to spend). However, you can see from the results that while the English ad set had a lower CPA, the Spanish + Affinity had a high CTR and outperformed the No Affinity ad by almost $1 per lead.

Facebook says the ethnic audiences are more engaged with brands that speak to them in their native language. We have shown that to be the case.  With more refining and a bigger budget, I feel these results would have been even better and cheaper. It should be noted that English is still the most used language on Facebook here in the States, so it is much broader which will make at the end of the day to be cheaper. However,  Spanish is gaining on it.

So now you’re probably asking yourself, “If it is more expensive per lead, why would I want to do this?”

(and know you’re saying “Omg how did he know I would ask that?”) I’m a wizard that’s how. (mind blown)

Is it worth it?  And how do you reach them?
Let’s talk numbers. As of July 1, 2014, the US Census Bureau reported that there were 55 million Hispanics in the US. At the same date, the total US population was estimated to be 319 and some change million. That breaks down to about 17% of the total reported US population. Those aren’t numbers to scoff at. Of those 55 million Facebook reports that 26.7 million of them have Facebook profiles. Of those 26.7 million 22.1 million (about 82.8%) are daily Facebook users and are highly engaged when using it. 95% of which access Facebook on mobile, and 47% access it exclusively on mobile.

Facebook also reports that 60% of US Hispanics use Facebook Messenger. So as it is with most groups anymore, the best ways to reach them are as follows. Mobile, mobile and mobile, in that order. 79% of them access the internet through mobile devices.

Speak to the women. According to Nielson, Latinas are the ones who control the purse strings for many decisions made in Hispanic families.  Ipsos MediaCT did a study to compare Hispanics to other ethnic groups and concluded that Hispanics would spend 27% more time per week online via smartphone that any other group. And one last surprising statistic: 80% of US Hispanics prefer ads that incorporate Spanish messaging. Shocking I know! Who knew people liked being talked to in their native language? It takes more work and a little bi-lingual prowess, but there is a tremendous amount of money on the table with this audience. Why leave it there? 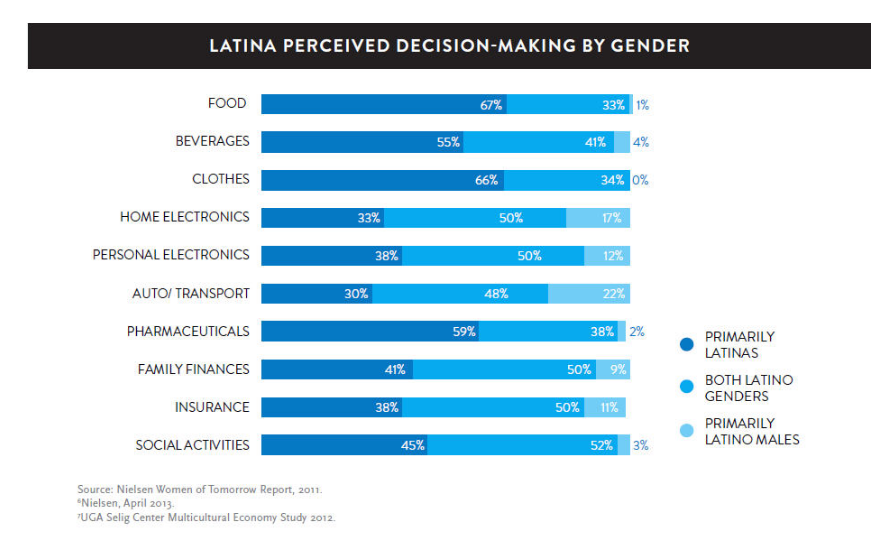 So what does all this mean?

Here are the takeaways you should take note of because this is a great opportunity. This group, accounting for 17% of the reported US population has a purchasing power  according to Nielson of roughly 1,200,000,000,000 and 1,500,000,000,000  (that is in trillions if you don’t want to count “0’s”. Trillion… with a T) Facebook summed it up nicely in a Facebook IQ post about Digital diversity of Us Hispanics.

To effectively reach the growing US Hispanics market, we as marketers’ must rethink our strategies to be more culturally relevant to who we are after. As with demographics, Hispanics today are a mobile-savvy audience that connects with friends, family, and brands across borders and languages.  Facebook sums it up here in 3 bullet points.

The bottom line is there are over 7 billion people in the world, out of that 7 billion, 1.71 billion of them are on Facebook. Not every one of those users speaks English which is why Facebook is available in 70+ languages. Branch out, and experiment with it. There is a massive audience out there not many are talking to. Capitalize on it.