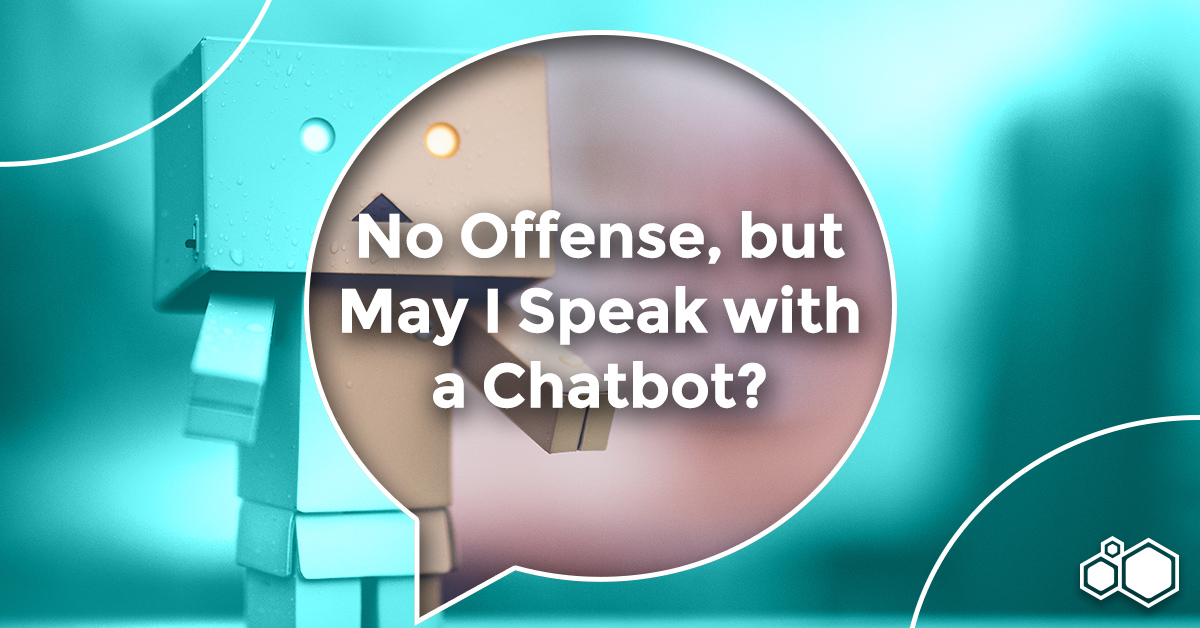 No Offense, but May I Speak with a Chatbot?

In 2001, GooglyMinotaur, an AOL Instant Messenger bot, was developed by ActiveBuddy to promote Radiohead’s fifth album, Amnesiac. Its release marks one of the earliest commercial uses of Chatbots. After conversing with nearly one million people about Radiohead related content, the bot was switched off. The cause of death is undetermined.

It took some time but Chatbots seem to be everywhere now. Their voice and text responses have become so rapid and life-like that some of us have probably conversed with a bot and didn’t even realize it.

69% of consumers say they currently interact with a virtual assistant or Chatbot at least once a month. It’s fair to question if that frequency may be higher than we realize? The technology is maturing rapidly.

Industries across the globe have already integrated them in many ways to automate common use functions, cut costs and simplify the buyer journey. The thing is, it’s working and most of us don’t seem to mind at all.

Now there are even chatbots designed for various age groups and specific needs. There are educational bots for children, and bots dedicated to comforting the lonely and the elderly. And there’s always the Dad Joke Bot when corny humor is the best prescription to calm your day.

While early opinions of Chatbots varied widely, the improved recognition accuracy and response speed has encouraged acceptance of bots from all walks of life. A Digital Pulse survey found that 85% of consumers prefer to interact with bots because they get faster and more accurate answers. And it’s not just younger generations, baby boomers are just as likely if not more so to willingly engage with bots to resolve most any customer service need.

So, what’s the secret sauce behind Chatbots?

Although voice and text bots have different input mechanisms, they both rely on the prowess of their NLP (natural language processing) engine. The NLP uses code that allows automated bots to understand the intent of human messages and craft responses based on a protocol. They utilize binary input, so voice bots have the added function of decoding a user’s voice into text before forwarding to the NLP engine. Those responses are then converted from text back into speech as output.

The quality of the speech output on bots has also improved to the point of sounding authentically human. So, perhaps like me, you may not have realized you chatted with a bot until afterward.

Not all Chatbots are the same

The potential for Chatbots in most any business arena seems endless. Today, any website or application can be turned into a Chatbot.

The technology behind the brains of the bot can vary widely from one bot to the next, but most will fall under one of two main types. One type is rule-based and the other is an AI.  Rule-based is when the bot answers questions based on some pre-trained rules. AI bots, on the other hand, possess the capabilities to learn from the interaction it has with the end users. Most bots today are rule-based. See the diagram below for a better understanding of the Chatbot ecosystem. Companies, like Chat Fuel, that provide enabling technologies allow businesses, like CNN, to create third-party bots on supported deployment channels, like Facebook Messenger.

The platforms used for messaging apps, cloud networks, SMS, and email clients where Chatbots live and interact with users are commonly known as deployment channels. These bots are categorized by their platform. For example; Skype bot, Slack bot, or Messenger bot, to name a few.

Amazon Alexa, Apple’s Siri, and Microsoft’s Cortana are considered native, voice bots meaning they are built by the platform or app in which they operate and they take voice commands. Many companies have added bot building to their standard list of services.

There are currently over 100,000 chatbots on FB Messenger.

The top complaint among Chatbot users is that the software misunderstands what you are trying to tell it, or that it doesn’t understand nuances in human dialog, slang or colloquial speech.

Take Poncho, one of the more popular chatbots to date.  Poncho began by providing users with a daily weather forecast but now has more developed capabilities and range. Like many other early versions of Chatbots, the road wasn’t always so smooth for Poncho and his team… 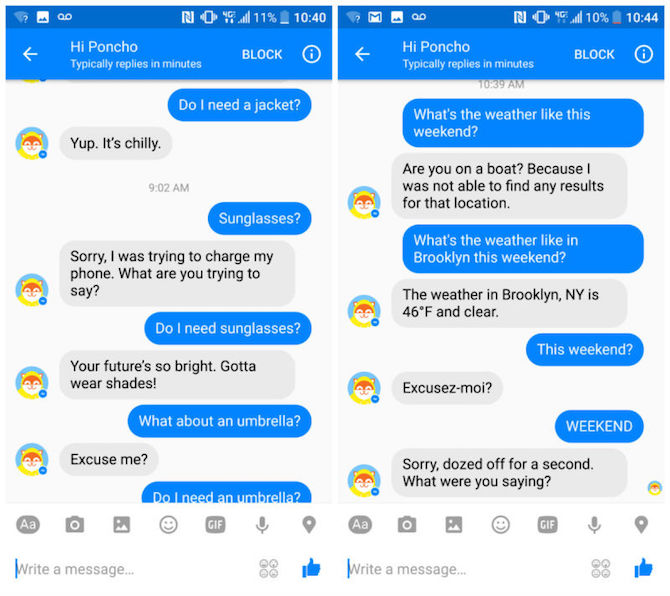 Talk about a fail. Fortunately, this early version behavior has become an exception as the technology has evolved rapidly over just the last few years.

Chatbots can deliver immense value to businesses. Improving efficiency and lowering the cost of human resources while keeping customers genuinely satisfied in the process. How often do you hear all of those at once?

Globe Telecom’s Hybrid Bot for Messenger drove a 50% reduction in calls to the hotline, which in turn also drove a 3.5x increase in human productivity. And the bots never call in sick. Current forecasts have chatbots saving businesses at least $8 billion by 2022.

Consumers like using bots for the same reasons we like texting. It’s easy. It’s to the point. It’s just personal enough.

Consumers have found that Chatbots are a direct path to their need for instant satisfaction. In the state of Chatbot 2018 research, it was found that consumers feel Chatbots are 35% better at answering both quick and complex questions.

Thanks to Forbes, we know that 61% of baby boomers and 51% of millennials agree that the main benefit of Chatbots is their ability to provide instant responses to questions.

Anything that consumers like using is a win for Marketers. The fewer touch points the better. Plus, so many of us spend time on Facebook and in Messenger that a large and still growing number of people are already comfortable in the channel and glad to avoid downloading another app.

Providing value and delighting your audience in the areas they already live, work and play is game-changing. Your clients will like it, too.

Are you ready to learn about how a chatbot will work for you? Because, no offense, but your customers would rather speak to a bot. Schedule a conversation with us today or Chat Now with the little guy in the bottom right corner there. Talk soon!

PrevPreviousDTOX Your Lead Data to Discover Marketing Gold
NextWhat Do Avocados & Online Video have in Common?Next